Such is the prejudice against post processing, or "Photoshopping" as dim and ignorant people call it, that most shooters will prefer the plain version. Yet I've never seen the plain version anywhere, and the other one has been nicked and put everywhere.

In point of fact everything is post processed. When you take a picture, if you are shooting in JPG, then the JPG engine in your camera will apply what it thinks of as the correct amount of saturation, sharpening, contrast etc. On more expensive cameras you can change these settings. That's effectively post processing. If you shoot RAW, then you can change the settings after you've seen the shot. Post Processing. The colourful shot above was processed in Nikon Capture NX. This is a version of the camera JPG engine in software. If I'd whacked up the saturation on the back of the camera, then the shot would, according to some people, not have been post processed. Because I did it afterwards, on the computer, that's cheating, apparently.
Posted by Louis Dobson at 17:57 5 comments: We're looking at ways to manipulate the light so you get closer to what the brain sees rather than what the camera wants to capture. Yesterday I described my preferred method of darkening the sky and lightening the ground, the Graduated Neutral Density Filter. Sometimes you can't use a GND - one common reason in my case is that I'm using a lens too wide to fit one too, such as the Nikkor 14-24 used in these two shots. Then you can do the job in post. In both of these shots the Nikon Capture NX software has been used, but if you have a RAW processor that can't manage this, then process the shot twice, layer the two shots over each other in Photoshop and then use Quick Mask to blend one version into the other.
Posted by Louis Dobson at 13:06 No comments: Note the witty title today. These aren't really a very witty subject - they are a grey filter darker at the top than the bottom, and they enable you to have a lit ground with a darker sky. They're pretty essential frankly, yet they are seen as esoteric. If you want to take landscape shots where you can see the ground yet the sky isn't blown out, then you need one. This is probably the most useful tip I've given you so far...
Posted by Louis Dobson at 23:07 1 comment: 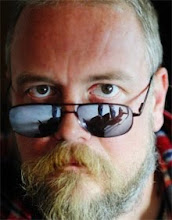